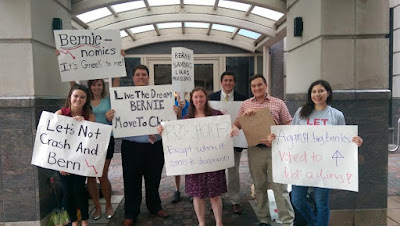 "Senator Sanders's failed big government policies truly represent the conscience of the modern Democratic Party. It's ironic that he decided to bring his campaign against wealth inequality to one of the most affluent liberal communities in the nation. I certainly hope he encourages Arlington's limousine liberals and Mercedes Marxists to practice what they preach by pulling out their checkbooks and writing a check to Uncle Sam during his presentation.

"The free market is the single greatest engine of economic prosperity. Free market policies lifted hundreds of millions of people out of global poverty, and rejecting these policies -- as Sanders and his party do -- will continue to harm lower- and middle-class Americans. Few are harmed more by this possibility than Millennials, who are entering the market during one of the most uncertain times in modern American history. Millennials overwhelmingly support market innovation and opportunity, and Sanders's proposals leave no room for either."

The Washington Examiner was on hand to cover the AFCYR protest:


Their handmade signs ridiculed Sanders' self-proclaimed socialist views. Signs carried messages such as "Bernie-nomics: It's Greek to Me" and "Live the Dream Bernie. Move to China."

The protesters were treated well by the Sanders event organizers — at least compared to the way protesters have been treated at events held by Hillary Clinton and President Obama. At Clinton's speeches, Caitlin Grimes said she had encountered people that "tried to get in our face and make us mad."

If Clinton had given the speech there Thursday, "There would probably be people out here to counter us," Grimes told the Examiner. Sanders' event staff did not make the protesters leave, as long as they did not block the exits and sidewalks.

Seeing Sanders as more welcoming than Clinton toward protesters, the group hoped to talk with the candidate. But they never got the chance. "It's just one of those things where we'd love to actually talk with him, but apparently he doesn't want to come talk with us," Ildefonso told the Examiner.

They still captured the attention of many passersby. Some took photographs, others slowed to read the signs from a distance and some asked about what the group was protesting.